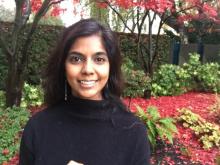 Ahalya Satkunaratnam is an educator and artist. She holds a PhD in Critical Dance Studies from the University of California Riverside and was an Andrew W. Mellon Post-Doctoral Fellow at the University of Illinois at Urbana-Champaign where she taught in both the Department of Dance and the Department of Gender and Women’s Studies. Satkunaratnam has worked in education and arts programming for over 18 years. She served as Art Education Director for the Freirean organization, Insight Arts; as producer and organizer for Voices of Resistance and the South Asian Progressive Action Collective, respectively; and was a member of the editorial board for SAMAR: South Asian Magazine for Action and Reflection.

Satkunaratnam has been a featured artist at the University of San Francisco’s 2011 International Women’s Day festivities, the 2012 Oakland Community College’s Creating Justice Conference, and the 2013 symposium, War and Peace: Visual Narratives in Contemporary Sri Lanka, in Colombo, Sri Lanka. She has performed in and choreographed with Chicago-based Natya Dance Theatre, San Francisco-based Duniya Dance and Drum Company, and Colombo-based Aru Sri Arts. Most recently, Satkunaratnam participated as a choreographer in the Creative Gesture Collective Composition Lab at the Banff Centre for Arts and Creativity. She joined the faculty of Quest University Canada in 2014. There, she teaches courses in cultural studies, performing arts, and women’s and gender studies. Her forthcoming book, Moving Bodies, Navigating Conflict: Practicing Bharata Natyam in Colombo, Sri Lanka, is forthcoming through Wesleyan University Press.