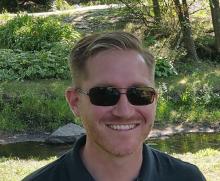 Michael is a graduate of Sheridan College's Technical Theatre Production Program. He has worked on the technical side of theatre as a props builder, lighting technician, automation technician, and technical director. In 2009, he moved to administration becoming Production Manager for Neptune Theatre. In addition to his role at Neptune, he has taken an active role in advocacy for the theatre industry, and is a member of the Advocacy Committee for the Professional Association of Canadian Theatres, and the Greater Halifax Arts Coalition, and is on the Board of Directors for the 1588 Barrington Preservation Society, and the Legacy Centre for the Performing Arts group.

Graduating from Ryerson University’s Performance Production program in 2010, Paul has spent time stage managing with Mirvish Productions, Tarragon Theatre, Soulpepper, and The Musical Stage Company, as well as held various positions at the Luminato Festival since 2009. He has also been the Associate Producer for Ryerson Theatre School’s fundraiser, Music of the Night: A Tribute to Colm Wilkinson. For five years, Paul acted as the inaugural General Manager for the barrier-free, arts-education organization The Artists Mentoring Youth Project (The AMY Project).